Cesonius was a Celtic God (the Celts being the original inhabitants of Britain before the coming of the Romans and later the Saxons and Angles, the 'English') whose 'brief' to us would seem most odd – deceit! The ancients were more pragmatic than we today. Modern man cannot conceive the notion of a deity of 'deceit' – it seems a contradiction of terms. But the ancients – and in particular the Celts (forebears of the modern Welsh, Scots and Irish) – took a more pragmatic view of life and the universe. It has been said that lying is often an absolute necessity and without it much of life would be intolerable. But this is not to be confused with lying for the sake of it.

Some people are notorious liars and they are their own worst enemies. Most people, however, may lie to protect themselves or to protect others. Is this actually wrong? Not necessarily so.

Cesonius, however, was not concerned just about deceit, he was/is a genuine god – or 'magical being' as author S. Rob frequently refers to him – who can exert great influence over a wide area of human activity.

THIS IS THE ONLY PUBLICATION THAT WE KNOW OF ANYWHERE DEALING EXCLUSIVELY WITH THE MAGIC OF THIS ENIGMATIC GOD.

This is not specifically 'white' or 'black' magic. This is pragmatic magic, for the modern person. Indeed, perhaps no other ancient god is more pertinent to the needs and pressures felt by moderns – particularly in matters relating to buying and selling, negotiating, and so on.

CESONIUS REPRESENTS A POTENT FORCE WHICH YOU NEED ON YOUR SIDE.

HE IS THE MAGICAL BEING THAT STOPS OTHERS FROM FINDING OUT WHAT YOU DON'T WANT THEM TO KNOW ABOUT YOU OR SOMEONE ELSE.

He is a god of protection.

This booklet consists of ABSOLUTELY SIMPLE AND EASY PRAGMATIC SPELLS FOR EVERYDAY SITUATIONS.

This is the god who enables you to see through other people's deceit and subterfuge.

Whilst you may have a legitimate right to protect your own interests which may mean that – regrettably – you have to lie, it doesn't necessarily follow that others are lying for the same reason. Their lies may conceal what is damaging to your interests.

Here in this publication are the magic spells that enable you to see when others are trying to deceive or manipulate you.

CESONIUS ALSO SHOWS THE WAY TO LASTING PROSPERITY AND POWER.

If it seems implausible to us it certainly wasn't to the Celts who had to live on their wits!

Cesonius is essentially a magical being who PROTECTS!

He is a god of travel. He offers protection when travelling, for yourself and your loved ones.

He protects even the transit of valuables, whether by post, courier, or by whatever means!

Whatever moves from A to B, be it person, animal or object, Cesonius protects and safeguards.

He influences all business transactions and stops others from putting one over on you.

He is the 'sneaky god', so to speak! Opening your eyes to the sneaky ways of others!

WE REPEAT: ALL THE MAGIC SPELLS ARE SO SIMPLE. ALL CAN BE USED STRAIGHT AWAY. No complicated rituals. No candles. No visualisation!

Cesonius reveals what others are really thinking about you, as opposed to what they are saying!

This is the god who 'allows' others to betray themselves to you! He also enables one to see what others are up to at a distance.

CESONIUS CAN ALSO BRING YOU THE LOVE OF A PARTICULAR PERSON.

HE CAN GIVE YOU INSPIRATION. WHATEVER ORIGINAL IDEAS YOU NEED HE CAN BRING.

HE CAN BRING YOU FRIENDS.

HE CAN ALSO UN-DO ENEMIES.

HE CAN EVEN REMOVE ANOTHER PERSON'S ADDICTION, declares author S. Rob.

CESONIUS CAN PUT YOU IN CHARGE OF PEOPLE AND SITUATIONS. (see chapter 5).

HE CAN HELP YOU THINK MUCH FASTER – TO BE FASTER THINKING THAN THE OTHER PERSON.

He can help you to learn things at astonishing speed!

HE IS THE MAGICAL BEING OF MENTAL AGILITY.

Happiness is also within his sphere. Likewise good luck.

You don't have to be Welsh or Irish to use this power – this is a universal magical reality which the Celts chose to name – CESONIUS. 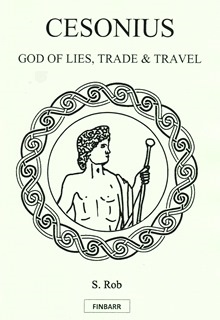