THE GRAND GODDESS
Invocation for Women

Women, and women only (any age) can perform the Invocations of the Grand Goddess, says African authoress Nana Apese Ami. Men may purchase this but they must ask a woman - with whom they are on intimate terms - to perform the invocations. According to the authoress, they work 99% of the time, and always within ten days.
The Invocations originate in Africa where in tribal religion 'The Grand Goddess' - as they call her - must never be ignored.
The authoress has been familiar with these invocations from her homeland for most of her life, but has not until now published them to a European audience. 'I am 77 years old and I would feel better now if the world knew'.
Shortly before submitting her manuscript to Finbarr an Indian friend complained bitterly to her about his daughter's intention to marry a Muslim boy. The family were distraught and no amount of argument could change the girl's mind. The authoress suggested the Grand Goddess Invocation to her friend who then persuaded his wife to do it. THEIR DAUGHTER SUDDENLY AND INEXPLICABLY DROPPED THE MUSLIM BOY!
In Africa following a military coup a woman's brother in the army faced a firing squad. The authoress urged her to invoke the Grand Goddess. Her brother was released - against all the odds!
Another woman was anxious about her husband being deported.
The Invocation worked for her.
A married couple were distraught at their delinquent tenants. No rents paid in a year. They wanted them out but there was nothing they could do. The Grand Goddess was invoked: the tenants moved the next week.
The invocations are simple and need be performed once only.
It can be for any purpose (health, money, love - whatever).
Results are within ten days, says the authoress.

This is a White Magic Book. 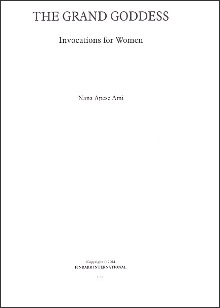